“In dealing with urban complexity, I feel friction surfaces that always inspire me to stretch musical nets and search for new sound spaces. Especially with electronic media, space and time can be overcome through transmission, storage and merging. Through the synthesizability of space, our relationship to it becomes relative. The apparent contradiction between disembodied and corporeal space thus becomes variable within the framework of the human imagination.”

As part of the European Music Month’s Composer of the Week commission, the project “RaumNetze NetzRäume” was created, for which I wrote the composition “mâts” for baritone saxophone and live electronics.

The project focuses on the individuality of single places – a place as a precisely designated location in space; as such it cannot be moved or exchanged, thus it is unique. What constitutes the place, however, are not its coordinates alone, but the things in their place. Through actions in this specific environment, the space acquires identity, relation, history, and thus becomes a carrier of meaning.  The piece “mâts” was performed once a day between July 9 and July 15, 2001, at different times of the day at a specially selected location in the city of Basel. This resulted in a spatial disposition that created a permeable network between physical, musical and electronic space, between composition and improvisation. Each of the seven locations and performances was recorded with a digital video camera, processed and transferred to the virtual “NetzRaum” on the same day.  With the choice of electronic media, impressions are put into perspective – space can be clarified as “a property of the human brain” in reference to the famous phrase of the theory of color perception and is thus variable within the framework of the human imagination. 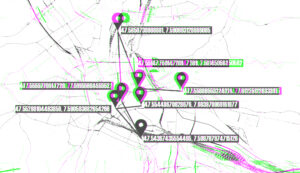 Commissioned by the European Music Month 2001