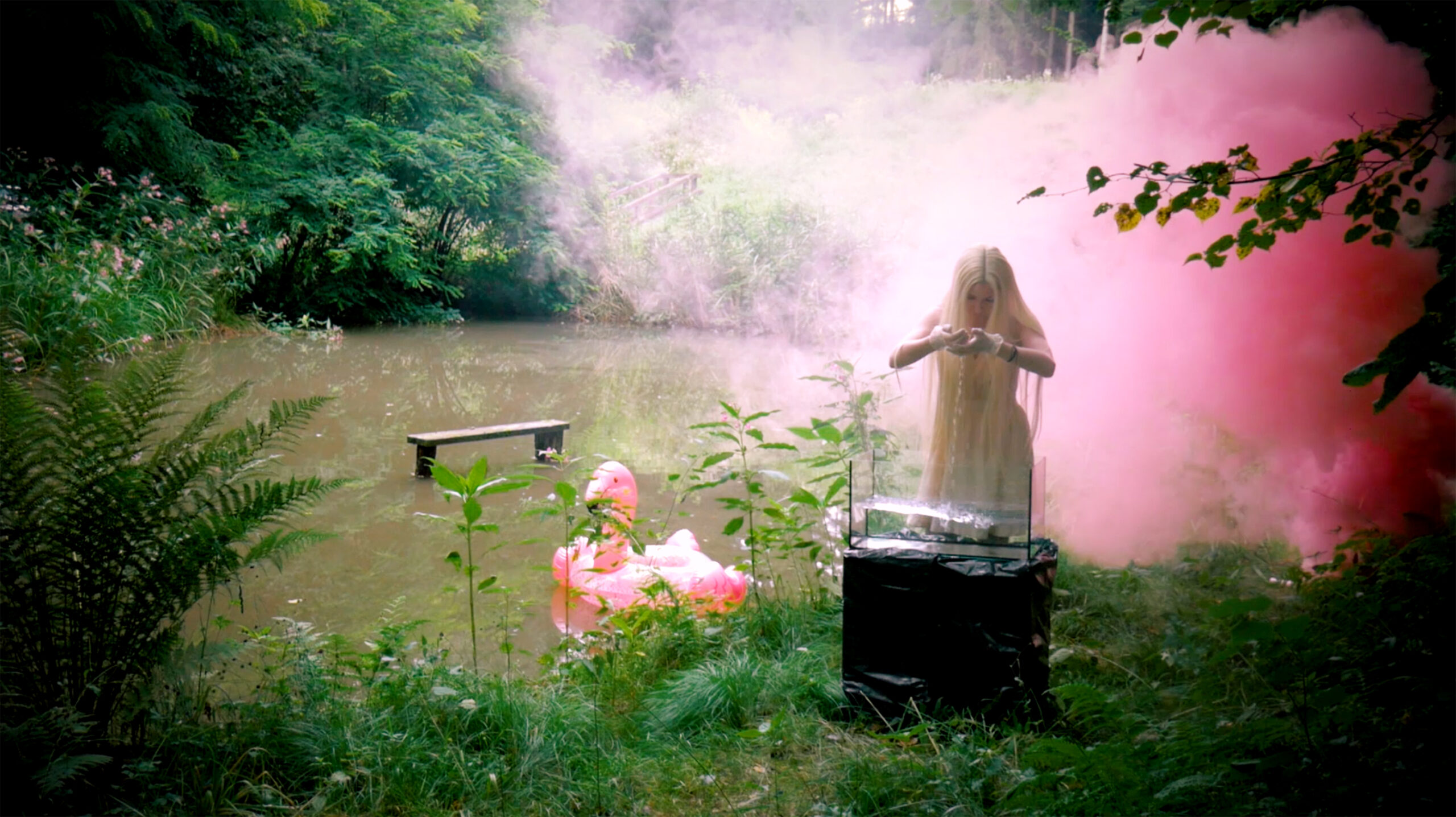 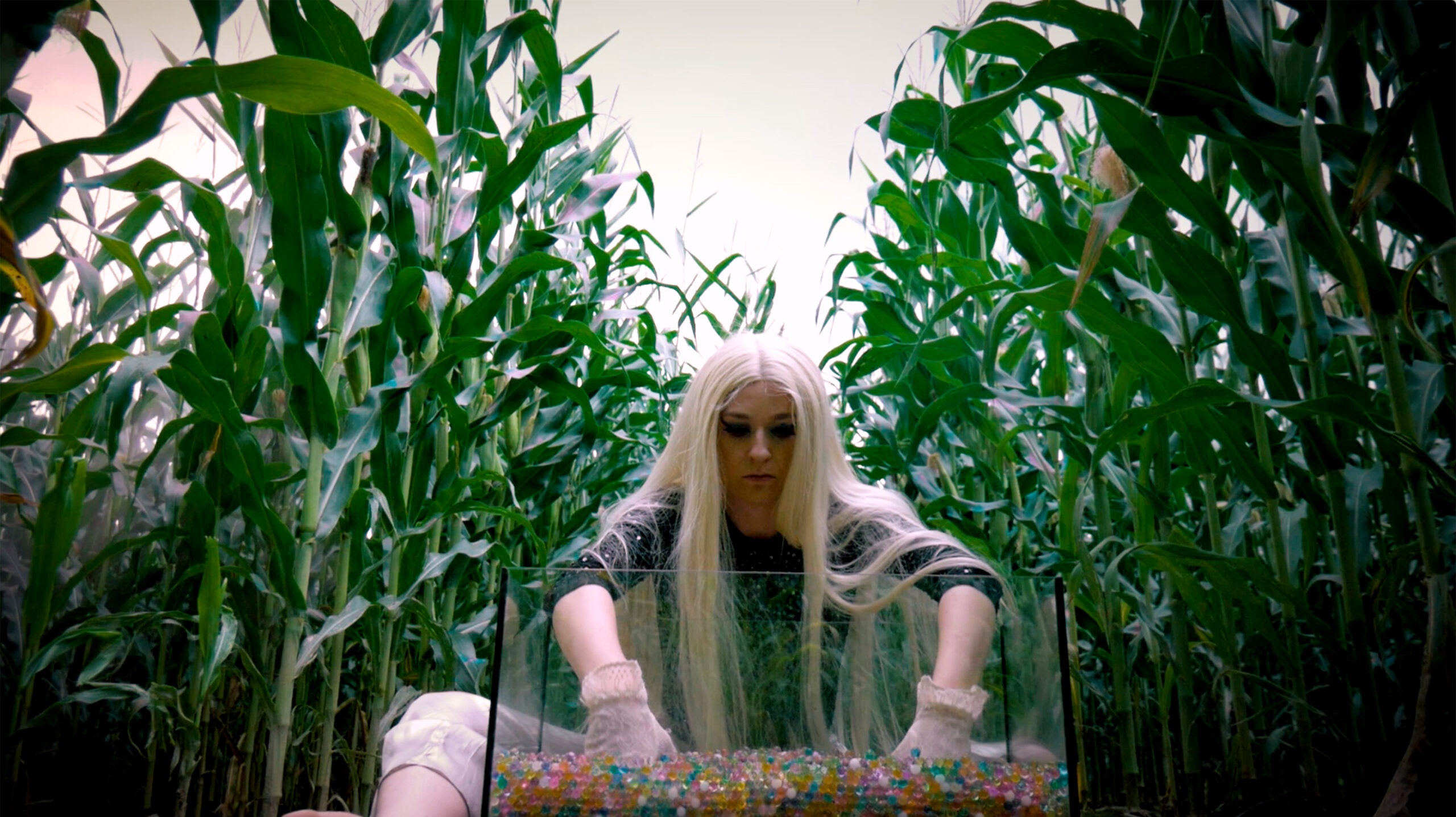 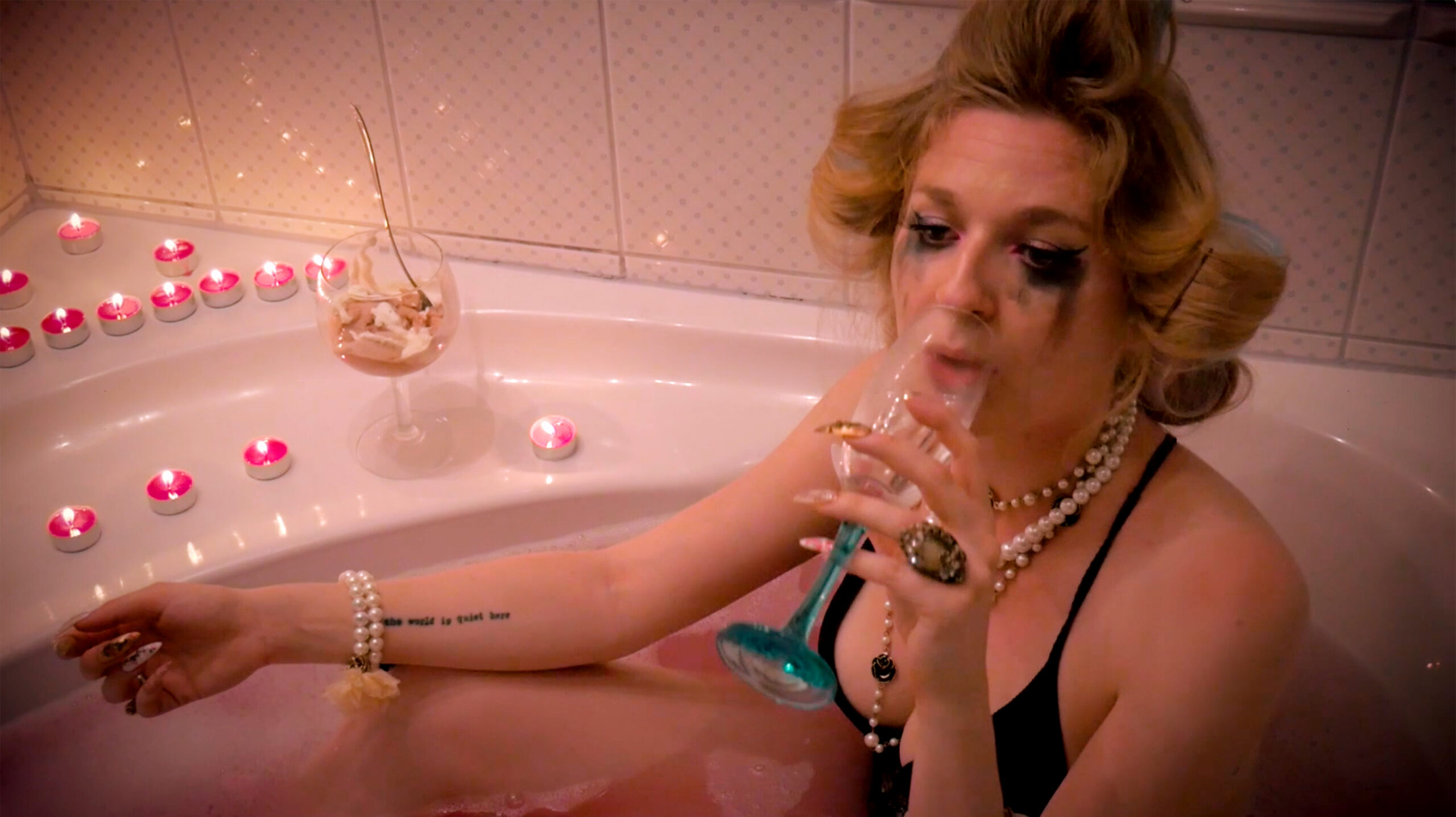 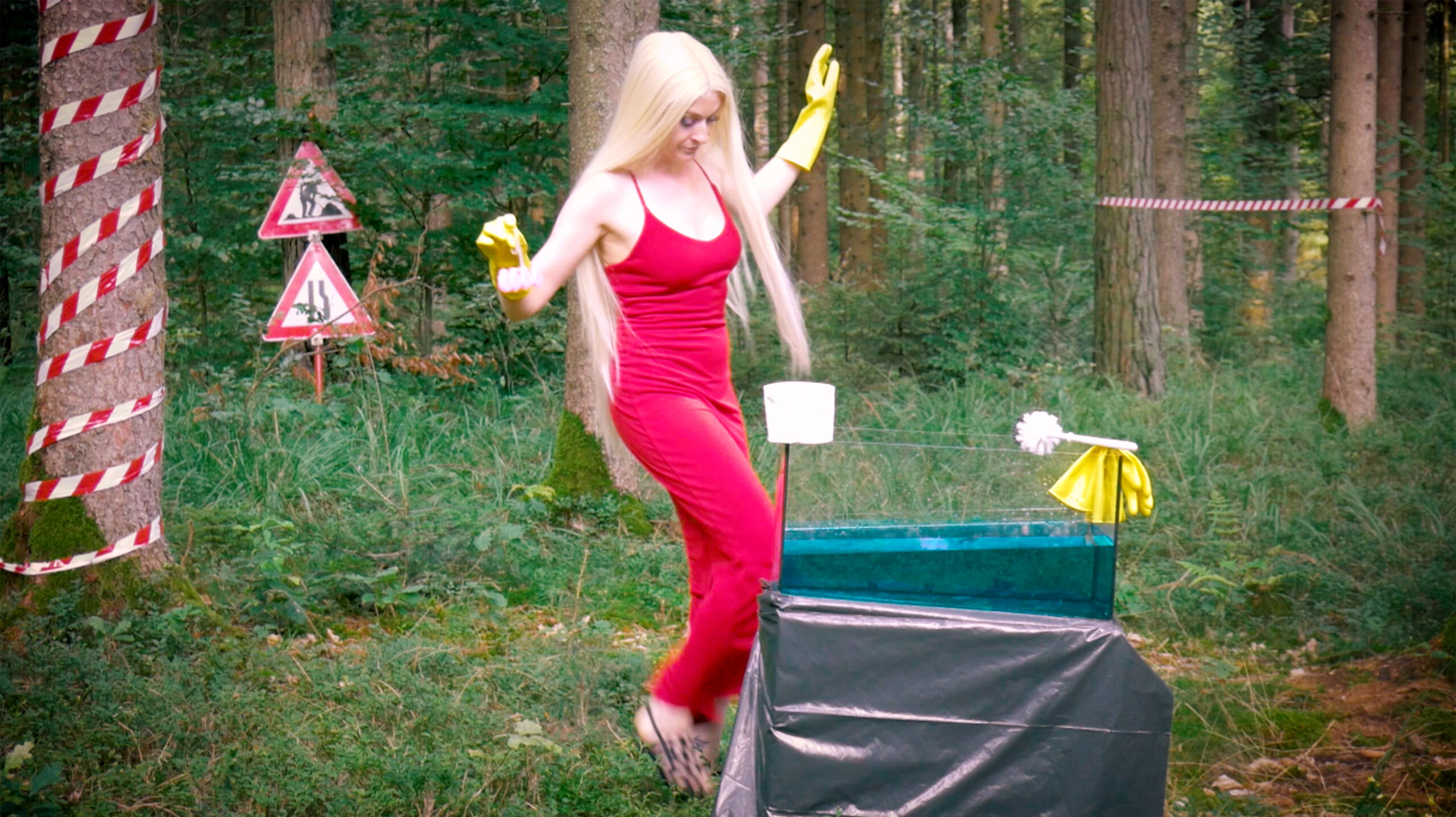 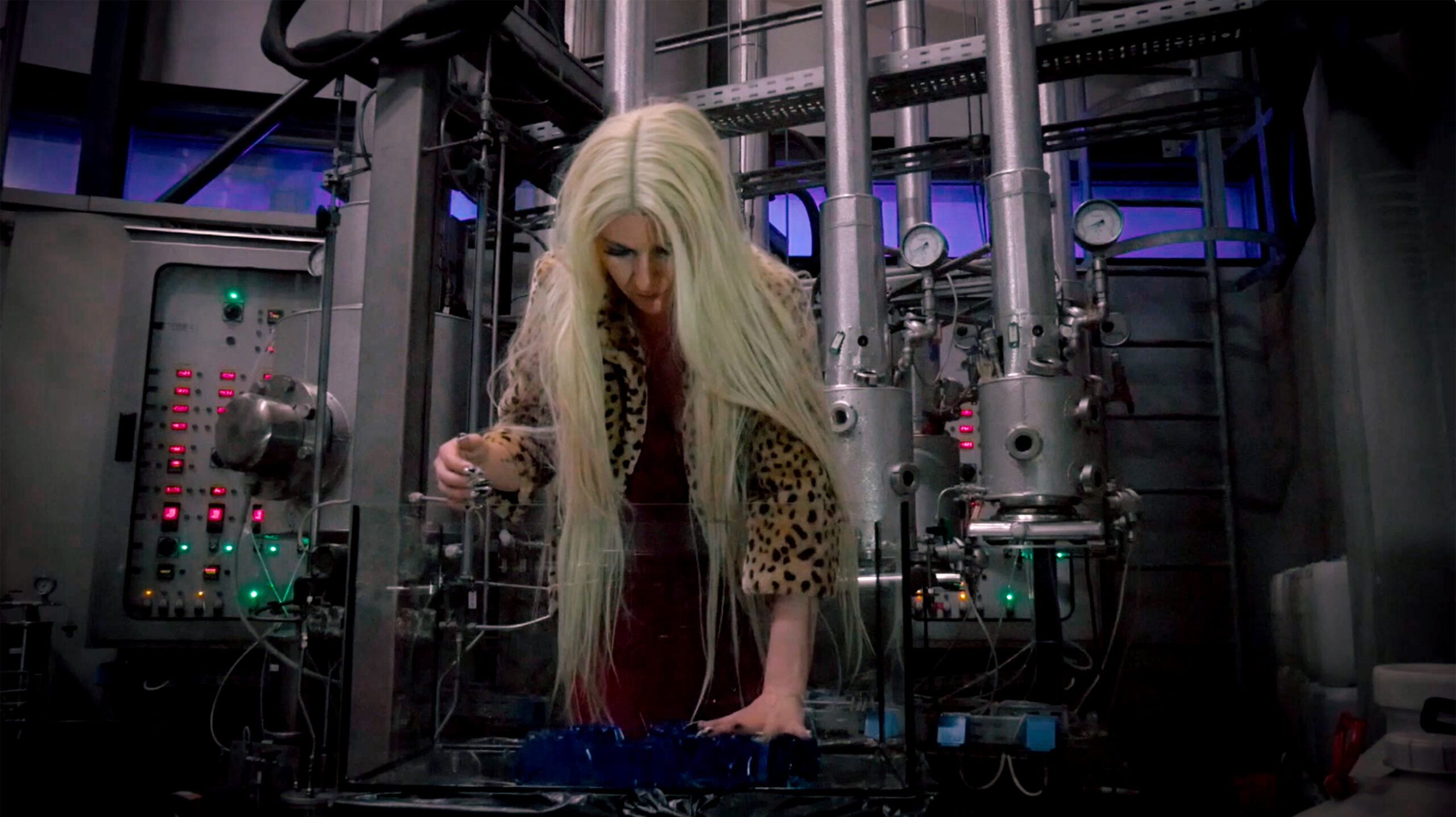 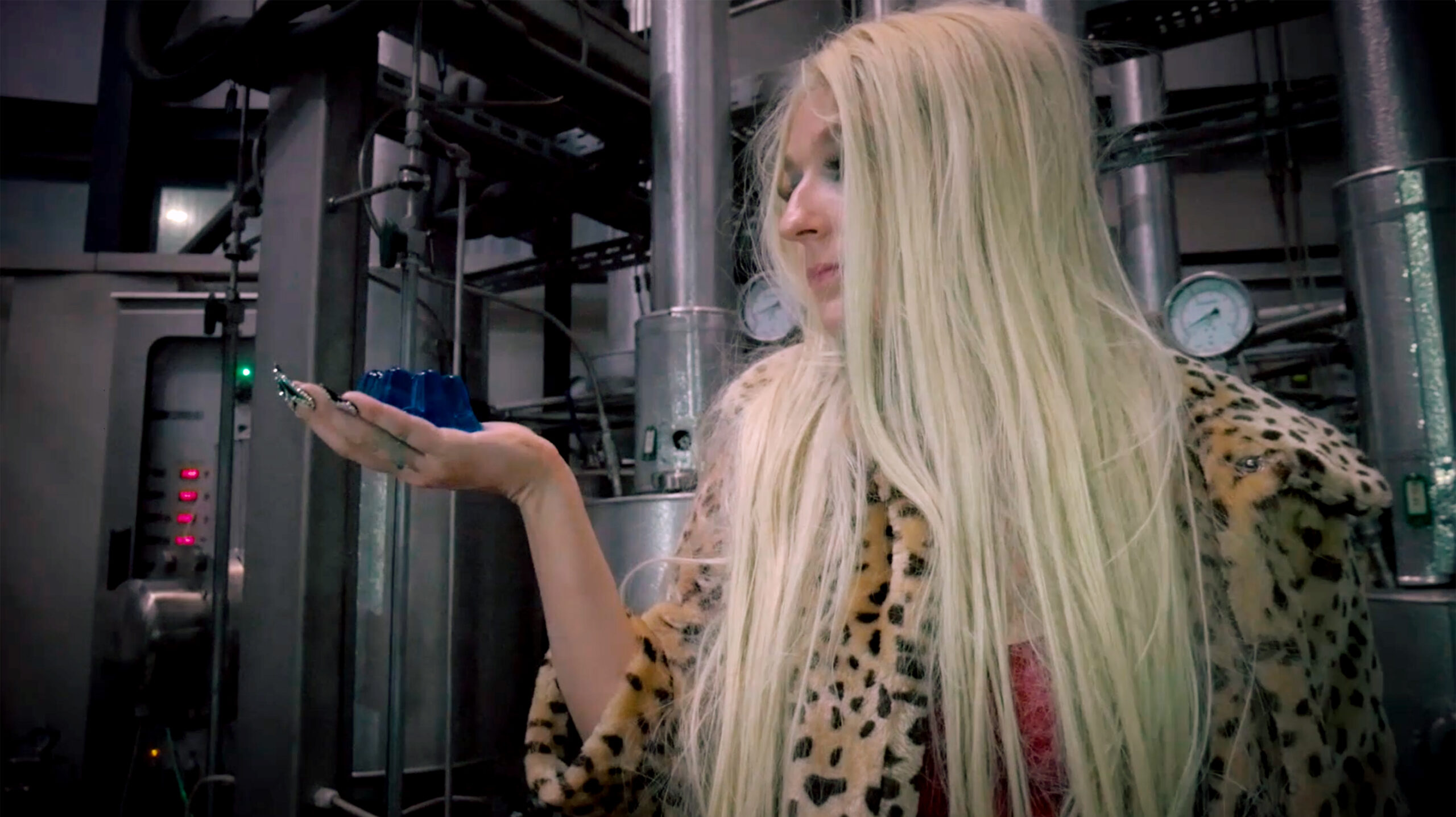 “Wassermusik” is a pop-cultural attempt at illustrating the construction and fluidity of femininity. In it a vortex of aquatic sounds are blurred with whirls of neo-dadaist images.

Is it a pop-cultural forest fairy performing ritual ablutions on the banks of her small pond with a dog and a plastic flamingo? Or is she an archaic goddess with a radiant crown who was thrown out of a time machine into a garbage dump?

The short film “Wassermusik” represents a journey through disruptions, irritations and traps. The materials that the protagonist stirs, kneads, and caresses collide with one another, sometimes appearing to be intertwined with the tapestry of sound on which she is standing, sometimes seemingly in opposition to it.

Listeners and viewers are drawn in by a juxtaposing mixture that can elicit ASMR (Autonomous Sensory Meridian Response) and then immediately get thrown out again, like styrofoam rain falling out of the sky. It ripples, it runs, it flows, it hisses. The image bends the woman where she stands strong.

The rubber gloves of the real world blur with the crown of rays from the dream world – in the best neo-dadaist sense.

Is the view into the engine room, where the woman is standing – and mixing the breaks between the worlds with blue jelly like a DJane –  the view behind the scenes? Or is it the bathtub where her make-up runs, where she can be observed in private. What is real, what is a glittery costume?

The femininity that guides the viewers through this film does not allow for any common cliché, it is in opposition to nature, then part of it again. She can seem threatening and the next moment, gets so busy with her activities that she doesn’t even notice the viewers, doesn’t address them at all.

Up until the snow burns – that too is possible if a goddess wants it.

The art collective “Captain Fiffy” is setting its sails to navigate the sea of audio-visual creation with “Wassermusik” for the first time.
Equipped with tattered optimism and other human emotions, “Captain Fiffy” explores a fresh aesthetic-musical ocean with earnest conviction but without a whiff of idealism. Welded together by a manifesto of joie de vivre and bliss, the crew of “Captain Fiffy” consists of composer & performer Oliva Artner, composer & electronic music artist Gary Berger and filmmaker Naima Noelle. 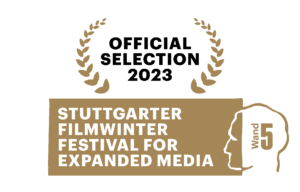 Statement of the Jury:

Captain Fiffy’s “Water Music” captures and enraptures. With its playful approach towards reality, its colours, sounds and shapes, the film intoxicates in every second and casts a spell over us, until we believe in the surreal. In a reality above our reality, in which everything is beautiful and possible and everything rings to the sound of our fantasies. The illusion overpowered the world and became reality. We don’t want to return but stay in the moment. Because: with “Water Music”, we found what we’ve been longing for. Therefore our decision is clear: it is infinite jest. Guaranteed!
The Selection Committee Film of Wand 5

Collaborative project based on the composition “Wassermusik” by Wolfgang Heiniger.